There is currently an ongoing internet debate over divine simplicity, between the Thomist Feser and the analytic philosopher Mullins. The latest entry is here.  An indefatigable maker of memes on Facebook sent me a meme about this debate that I paste below. I won't comment directly on the debate, the Scotist position is well known, even if not normally brought up in these debates. Given the nature of this particular debate, even Aquinas' own solution of the rationes is also not at play.

As everyone knows, I did my dissertation on the divine attributes. The medieval debate went through a logical development.
1. Aquinas, adapting Bonaventure, argued that divine attributes all had distinct definitions (rationes) but these rationes were all in the human mind, or at least their distinction. They weren't false, because God verifies them all from afar. God is just undifferentiated perfection, no distinct attributes.
2. someone pointed out that this means that God has no knowledge of his own attributes.
3. all the early Thomists then argued, 'aha, no, see, God knows the contents of the human mind, and thus he has knowledge of divine attributes ex consequenti'.
4. Henry came along, and said that this was all bunk, that the divine intellect and divine will, which are distinct, each generate their own attributes. all attributes are reducible to either intellect or will, that produces them in the divine essence.
5. Scotus comes along and says Henry is bunk, all attributes are already there, formally distinct before even the divine intellect thinks about them.
6. Ockham: the word 'attribute' is causing all this problem, lets get rid of it.

And that is about it.

here's the meme. It is not really right, since Mullins is denying divine simplicity full stop, and Scotists do defend it with the formal distinction and instants of nature. So they cannot really sit back and watch Feser go it alone. But this time we will. For Scotus' theory of formal distinction, see here.

Mayronis was the first Scotist to come into direct conflict with Thomism, in a series of debates at the university of Paris in the 1320's. The debate was over the formal distinction and instants of nature.

Scotus makes the following comment in Lectura I d. 8 p. 1 q. 4 (ed. Vat. XVII p. 48) about the various debates over the distinction of reason "...dicunt aliqui concordando in conclusione principali, sed discordant in modo ponendi, in quo se impugnant; et eorum impugnatio est pax nostra." Basically, they agree that divine attributes are distinct only by the intellect, but disagree how it comes about.

Mayronis also talks about the peace, but his peace is between the schola minorum and the thomists; he has some interesting rhetoric about the thomist pierre roger disturbing the peace of the schools, and he reformulates it a few times. Anyway, on this see the "Disputatio" volume, just about the only text of Mayronis that has been critically edited. 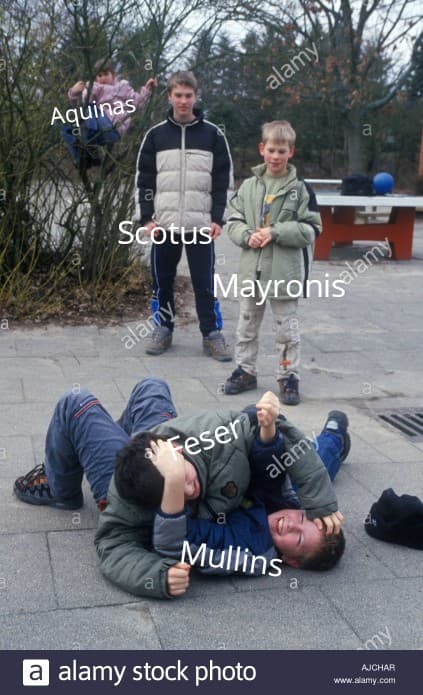 Update: Feser adds to the debate with an entry on Scotus, here. His point is that divine simplicity has been interpreted in different ways, that attacking Aquinas, even if the attack succeeded, does not suffice for defeating divine simplicity. My co-blogger clashed with Feser on the formal distinction around the time Feser's book on Scholastic Metaphysics was published. In the post linked above he is fairly general about it. I would probably only quibble by saying that the formal distinction, in keeping with the Parisian account, is a diminished real distinction, not a midway distinction between real and rational distinctions. But given the internal Scotist debate over such matters, I don't fault Feser for this. Blander, in his dissertation, attacked the connection between separability and the real distinction, which Feser holds, but this is quite recent research, even for Scotists (see the link to his paper in the combox). I am sympathetic to this, though I wonder how separability fits in, since the separability criterion shows up in the Quodlibet, perhaps Scotus' final work (assuming the final work was not the Quaestio de formalitatibus).

One could also point out, regarding Feser's post, that the Scotist position on univocity and analogy is that they are compatible in the same concept. This has ever been the opinion of the Scotist school, with the sole exceptions of Mayronis and Bonetus. I have a piece appearing eventually on this topic. But Feser can't be expected to know this, since even Scotus-scholars have forgotten it. The modern study of Scotus, rightly focused on his manuscripts and actual doctrines he held, has unfortunately neglected the study of the ancient school. Thus certain things that should not have been forgotten, were lost.

I'm "self-banned" from commenting on Feser's blog. I wanted to see what Thomists (or those friendly to or knowledgeable about it) think about the following objection to Thomism and divine simplicity: So I would say I am 99% sure that foreknowledge is incompatible with libertarian free will (the categorical ability to do otherwise in a non-random way). Now, if "Mullins reply to Feser on 8/26" is true right now, then Mullins can't do otherwise without falsifying the truth value of the sentence. To be free, "Mullins reply..." would have to false (or neither true nor false), then becomes true if and when Mullins replies to Feser on 8/26. Since it becomes true, it seems to me there is a change and/or succession in God's intellect (in God, therefore). This suggests to me that even if I (a layman, mind you) can't pinpoint exactly what goes wrong in Thomist arguments, there must be something wrong at the root of it. If I'm right, the true debate is between open theism and atheism. That is, unless the Thomist wants to reject libertarian free will and say we are all puppets of Pure Act.

Is the portion of the Conflatus you gave me not critically edited?

Well, how "Thomist" Pierre Roger is, is open to debate. The "Pax" referred to by Meyronnes is a little tricky, since we don't know what exactly it's about. In spite of such clowns (as myself) talking about the Meyronnes and the first mention of the "schola minorum", it should be noted that Meyronnes only uses the term (that I've found) in his writings as a bachelor; the importance of this point is that a regent master is in charge of his own school, so Meyronnes-the-master might have a different attitude towards schools.
And before Meyronnes, the Dominican Matteo Orsini openly mocked Hugh of Novocastro's defense of formalitates - if, that is, you believe the word of Meyronnes' secretary, and if that's what he really was.
All this is an aside, of course. Barbet's "edition" of the principia debate pretty much comes from a single manuscript, and Maier has shown that the last part is directed against a Dominican, and not Pierre Roger. Moreover, that first question of the Conflatus was part of Meyronnes' principia.
...which reminds me that I have an article to finish on that.

Michael: no, that is a transcription of the 1520 ed. maybe a glance at mss here and there, but nothing more. Still, better than nothing and still in print.

Bubba: sure, I was just repeating conventional wisdom on Pierre Roger. I haven't read it in quite a while, though Mayronis does take pains, even against PR to show how his notion of formalities is not so far off from Aquinas.

ah, so the 'schola minorum' might actually just be the literal school, not an idealogical orientation?

I await your complete edition of Mayronis' principia debates.

And sorry for the ugly, blatant self-promotion, but my own views about the formal distinction seem to allow for greater complexity than traditional simplicity doctrines permit:

thanks for these, Josh, do you happen to have copies?

I would love to read theses papers, too, Josh. Thanks for alerting us to them!

Well, my apologies. The Williams/Steele article has not yet been published - and doesn’t appear to be listed yet as forthcoming on the ACPQ website. Hopefully it will be out soon. I will see if there is any access to it elsewhere yet.

I have another link that I can give to folks privately because I get 50 free downloads of the article. Given the overwhelming popularity of Scotus, though, I can't guarantee that they aren't all gone already! (No, I don't track analytics. It's too depressing.)

You were also actually banned by Fese, a

Nobody has refuted my argument yet.

this is not directly related to the topic, but I hope i could get some help. I want to study and tackle Scotus's works. Is there any order that you recommend for reading his works? Should I read some introductions to Scotus before reading Scotus himself?

Scotus is just hard, but you should read him for yourself. The 'Duns Scotus metaphysician' is a nice place to start, since it has commentary too. Ther are introductions, probably the best is Bettoni. Also, Wolter's Book on the Transcendentals can serve as an introduction.

I would second the suggestion of Duns Scotus Metaphysician. Not only does it provide some important texts, but it doesn't require that you understand (in advance) the matrix of texts and traditions in which the Ordinatio and Reportatio is embedded; thus it is useful for beginners. In a similar vein, Thomas Williams' recent edition/translation of texts from Oxford UP is very good, titled John Duns Scotus: Selected Writings on Ethics.

There is a decent amount of good secondary material. I have benefited much (even where I disagree) from Richard Cross's Great Medieval Thinkers volume, simply titled Duns Scotus, also from Oxford UP. The Cambridge Companion to Scotus contains some excellent material, as well.

Fun fact: OUP has declared John Duns Scotus the September Philosopher of the Month. Sadly, there are no pinup pictures:
https://global.oup.com/academic/category/arts-and-humanities/philosophy/philosopher-of-the-month/