There is a new Scotus publication from Franciscan Institute Publications!

Now we have a working text of Reportatio IV from Oleg Bychkov and Trent Pomplun.

This book, gives the reader, both in Latin and in English translation, a solid working text of the Examined Report of the Paris Lecture of John Duns Scotus, known to scholars as Reportatio IV-A. 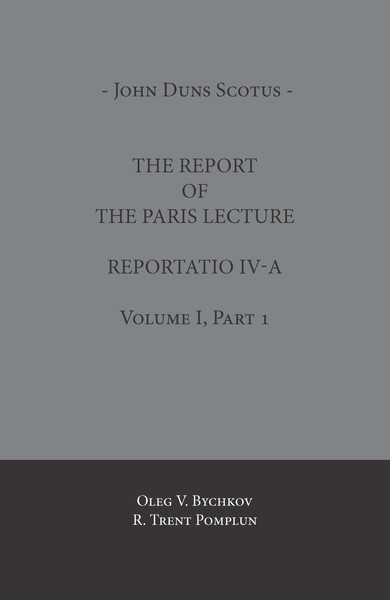 There is a new book on baroque Scotism about to hit the shelves. The author is Claus Andersen (profile here). The book is:

Here is the English description:

Baroque-age Scotist philosophy was, on the one hand, characterised by recourse to the Medieval thinker John Duns Scotus and, on the other hand, by an adaptation to trends in contemporary scholasticism, first of all that of the Jesuits. What kind of metaphysics did this particular constellation within the history of philosophy produce? In order to answer this question, the present book analyses the work on metaphysics by the most important representative of early modern Scotism, Bartolomeo Mastri (1602-1673). In addition, the book investigates a multitude of scarcely or never studied works on metaphysics from the Franciscan scholastic tradition of the 17th and 18th centuries. The peculiar profile of a forgotten philosophical tradition with its astonishing plurality becomes apparent. By focusing on a phenomenon from the history of philosophy outside the mainstream, this work contributes to a more differentiated view on the intellectual culture in early modern Europe.

Here is Henrik Lagerlund's review of Richard Cross' book on Scotus' theory of cognition. Lagerlund does not take issue with any of Cross' interpretations of Scotus, at least insofar as they are grounded (or not) in the texts of Scotus.

There still has not been a review from within the Scotus guild. Some criticism of Cross' interpretations can be found in John van den Bercken's recent essay on the powers of the soul. Pini, in his essay on objective being and Scotus seems generally dismissive, and I have some criticisms forthcoming hopefully later this year (I hope... it's been done since 2014). But no review from establishment Scotism.
Posted by Lee Faber No comments: