Duns Scotus and the Brockie Forgeries 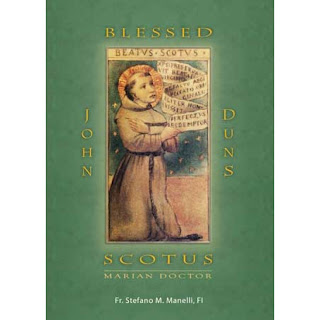 What follows are some brief thoughts on the volume I linked to earlier, Blessed John Duns Scotus: Marian Doctor by Fr. Stefano Manelli, FI. It is published by the Franciscans of the Immaculate, who also have several other volumes on Scotus for sale. Let me say at the outset that I am more than pleased that they are attempting a popular presentation of Scotus. Given the current position held by Catholic Academia (Scotus is evil), it is encouraging that there are those who promote his thought.

Unfortunately this volume relies on the Brockie forgeries. Which is odd, because these were exploded over fifty years ago.  More on Brockie below. The information that comes from the forgeries is that Scotus had an uncle named Elias, his father was named Ninian and was a wealthy landowner. These facts are also found in just about every internet  biography of Scotus, as I am reminded every Nov. 8 when all the 'saint of the day' blogs post this erroneous info. It was also present in the Duns Scotus movie, which was produced by the same Franciscan group.  The Manelli volume also includes lots of other pious myths, but unfortunately he gives no references so I cannot trace them down. Normally, the lack of notes in a volume meant for popular consumption would not bother me, but given there is so much myth-making involved I would like to know where it comes from. For example, the author claims Scotus was a big dummy but prayed to the Virgin who made him smart (this was also in the movie). Also, Scotus allegedly held the Christ child on one Christmas eve during 1290's. Also, before his famous debate at Paris over the immaculate conception, he passed a statue of the Virgin on the facade of the royal chapel and asked the Virgin's favor. The statue nodded, and henceforth was known as "Our Lady of Duns Scotus", but was broken up and thrown in the Seine by the French revolutionaries, and was eventually dredged up by another order and became known as 'Our Lady of Good Health'. Finally, Scotus is alleged to have suffered a breakdown in disputing with Beguines and Beghards and died soon after (perhaps a none too subtle attempt to make him a martyr and so an automatic saint). All of these tales are alleged but no reference provided. No doubt they are part of Scotus' hagiographical tradition and not simply fabricated by Fr. Manelli, but in the absence of notes it's impossible to tell.

But regarding the Brockie forgeries about Scotus' origin there is no excuse, as a lengthy article was published in the first Studia Scholastica-Scotistica series.

Marianus Brockie (1687-1755) was a Benedictine of the abbey of St. James in Regensburg, Bavaria. He attempted to write a history of the religious orders called the Monasticon Scoticanum, though it was never published. This volume was examined early in the twentieth century by a historian, Dr. Easson, and Longpre, the famous Scotus scholar. Easson was suspicious of some of it, but it was not until Docherty wrote his article that the true extent of the fabrications became clear.

Here's a choice quote from Docherty's article, a comment on a passage about "Elias Duns", p. 357:

In other words, in his anxiety to substantiate his unique thesis on the origin and early life of Duns Scotus, Brockie actually introduces the allegedly relevant clause from the Tweedie Codex and Register [both fabricated] in no less than three different original versions, all variously corrected and two duly cancelled, and with the bold emphasis of its having been found "his verbis", "nominatum" and "expressis verbis". This is surely the high-water-mark of Marianus Brockie's catalogue of bogus charters, fictitious histories, imaginative hagiography, outright mendacity and crass effrontery. On his testimony alone has rested the popular Maxton-Littledean theory on the birthplace of John Duns Scotus, and not the least contribution to the seventh centenary of that event would be its timely and final erasure from the standard manuals and other works of reference: to that end this study has been directed.

1. Marianus Brockie was himself guilty of forgery in compiling his Monasticon Scoticanum

2. This was by no means an isolated instance or occasional lapse; rather, it permeates the whole of his Dominican history and almost constitutes entirely that of the Friars Minor Conventual.

3. The so-called "Codex Tueedianus" - in so far as he intended its acceptance as a primary source - simply did not exist, except in his own incredible imagination.

4. Quite clearly the alleged Register of the Franciscan Conventuals at Haddington comes into the same category.

5. So also - I venture - does the elusive William Tweedie, "scriba primarius" of Haddington, not to mention Elias Duns and the other kindred of John Duns Scotus.

6. The total number of documents which I have found to be certainly fabricated by Brockie in respect of the Scottish Dominicans and Friars Minor Conventual is at least sixty-five, plus three probables, i.e. where the holograph copy is missing. From the nature of these we can also evaluate his references to ohers, including alleged diplomas of Alexander III, David II and James I, which "had been eaten-away by book-worm". Nor does the list include his countless "extracts" on personalities and other items, apparently taken from the codices containing the documents. Of the latter forgeries, six royal diplomas, twenty-seven other charters and one indenture from the Tweedie Codex refer to the Franciscans, while twelve others (including one probable) from the same source apply to the Dominicans. No less Brockie's own composition, although falsely ascribed to other sources such as Guthrie and the Baillies of Castelcary, are three royal diplomas and sixteen charters, plus two probables, for the Friars Preachers also.

Ironically, Manelli includes the letter of Paul VI, "alma parens", which was written for the conference in which Docherty's article appears.

Manelli also includes an address of John Paul II to the Roman Scotistic Commission; JPII is more positive in his assessment than is the current Pope. See Manelli, p. 112:

With his splendid doctrine on the primacy of Christ, on the Immaculate Conception, on the primary value of the Revelation and of the Magisterium of the Church, on the authority of the Pope, on the capability of human reason to make the great truths of faith accessible, at least in part, and to show their non-contradictory nature, Duns Scotus is even today a pillar of Catholic theology, and original teacher, full of ideas and incentives for an ever more complete knowledge of the truth of the faith.

Final estimation of Manelli's book: most of it is pious myth, the section on Scotus' positive doctrine is short (and seeks include Scotus as a defender of the title 'co-redemptrix' for Mary), but the translation of 'Alma parens' and JPII's address is well worth the price ($4.25).
Posted by Lee Faber 3 comments:

A volume of the new Durandus de Sancto Porciano edition has been published, containing distinctions 1-5 of Book II. It retains for the surprisingly reasonable price of 69 euros.
Posted by Lee Faber No comments:

Two Arguments for the Formal Distinction in divinis

Furthermore, God ex natura rei is formally blessed and not formally [blessed] in relations of reason; his beatitude, however, formally consists in intellection and volition; therefore the intellect and will, which are the principles of [those acts] are there ex natura rei.