A volume of studies on Scotus' Parisian Reportatio and its reception in Scotism is now available, as a part of the Recherches journal.  Available here.

Here is the table of contents:

The Anonymous Scotist of Vat lat 869 on Analogy of Being

Here is some undigested Latin text on the analogy of being from the anonymous Scotist of Vat. lat. 869. This author wrote a collection of texts to be found in this manuscript such as some questions on the De anima, the Quaestiones ordinariae de conceptibus transcendentibus, and some spare questions on various topics. The manuscript has been variously studied by Longpre, Stella, and most recently Dumont.

Something sent to me from the depths of the book of faces. 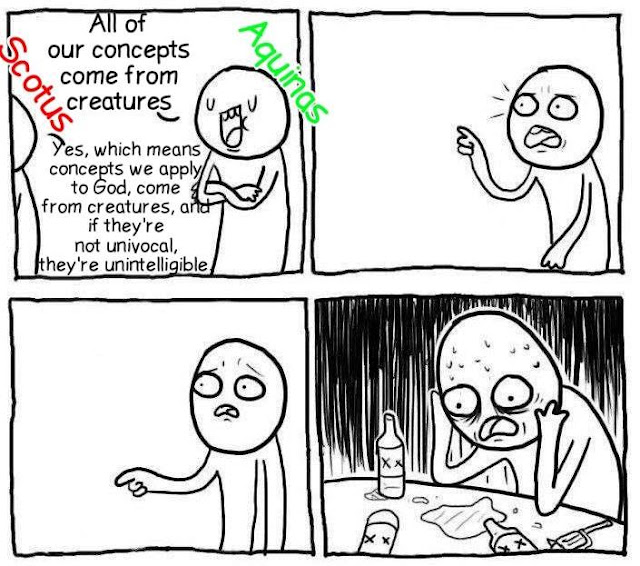 Another translation, made originally for a class I taught last fall.


[Quaestio 3: Whether the concept of being is maximally first]

To the third we proceed thus:

Furthermore, in VII Metaphysics chapter 1 it is said thus: “something is said to be first in many ways, but substance is first of all with respecto reason [ratio], knowledge and time; therefore the concept of substance is maximally first.

This is confirmed, first by this which is said in the same place “first being and not some being,” that is not through some being, “but being indeed will be unqualifiedly [simpliciter] substance.” Second because in I De generatione chapter 7 it is said that being “unqualifiedly singifies the first according to each category,” that is, substance.

Contra: being is impressed [on the intellect] by a first impression, from [the] first [book] of Avicenna’s Metaphysics chapter 5, therefore the concept of being is unqualifiedly first.

[Response to the Question]

I respond: in that question I will first declare three conclusions, second I will exclude certain objections.

[Conclusion 1: the quidditative concept of being is most common]

I show the first conclusion thus: that concept is most common whose extent [ambitus] nothing positive can escape; but nothing positive can escape the concept of being; therefore the concept of being is most common. And briefly, all philosophers and doctors agree in this conclusion.
{Whence Richard the Englisman [argues thus]: just as the first complex concept is founded in being by comparing it to its contradictory, namely, of every being or non-being, so it is necessary that the first incomplex concept be said of all most commonly, for a concept whic is includited in every concept and none of those [is included] in it is maximally first; but the quidditative concept of being according as it is being is of this kind; therefore etc.

Alexander [de Alessandria] in I sentences proves it to be thus: “that which contains infinite being by its primary division seems to be the widest concept.[1]}

[Conclusion 2: the concept of being alone is the most common quidditative concept]

[Conclusion 3: only the concept of being is maximally first]

Furthermore, second thus: just as being is formally distinguished from non-being, so non-being from being; therefore a formality is common to being and to non-being, and consequently it is more common than being.

[Response to the Objections]

As evidence of the foregoing I say first that community in concepts can be understood in four ways: first in the order of the categories, secund in the order of the concepts of real beings, third in the order of howsoever[qualitercumque] beings, fourth in the order of the transcendentals. In teh first order the concepts of the most general are the most common and unqualifiedly first, in the second the transcendental concepts common to God and creatures, and substance and accident, in teh third the concept of being common to real being and being of reason, or to being in the soul and to being outside the soul, which is the same, and this community is treated in VI Metaphysics, in the fourth [order] the proper concept of being which indeed is common to the one the true and the good and the other proper passions [of being], not by a community of formal predication, but of denominative predication and virtual containment, as has to be explained below. From the forgoing it is clear that simply speaking only the proper concept of being is most common and maximally first.

To the first [objection]: against this should be said that perhaps [the term] ‘concept’, as some say, is not a name of first intention. It is not, however, unsuitable for many second intentions to agree in something of this kind, just as noting of first intention is common to the categories according to some and nevertheless they [i.e. the categories] agree in this intention which is ‘category’, and the ten most general [categories] in the intention which is ‘most general’ and the same, it seems, can be said about [the term] ‘quidditative’.

To the second [objection]: it is clear through the same, for ‘formality’ as some say, seems to be a second intention.

It is confirmed, because what is founded in nothing is nothing; but the formality of non-being, if it is posted, is founded in nothing; therefore the formality of non-being is nothing. The major is evident. The minor is clear, because either something positive is subject to it or nothing. If nothing, I have what is proposed. If something positive, therefore it is not non-being which is posited non-being.
Therefore I say otherwise that just as no intelligibility per se befalls non-being or nothing, so no formality befalls it per se.

To the form [of the objection]: I deny the consequence, because it fails by a fallacy of the consequent. For ‘this is distinguished form that’ can be understood in two ways: in one way that ‘this’ means one formality and ‘that’ another formality, of which neither is the other; in another way because ‘this’ means a formality and the other means a mere negation of a formality. Therefore to infer determinately commits the fallacy of the consequent. To the antecedent I concede that being is formally distinguished from non-being and non-being from being, but not in a similar way, because being is distinguished from non-being through its own formal character[rationem], but non-being is not formally distinguished from from being through its formal character[rationem], because it does not have one, but because it is a formal negation of the character [ratio] of being.

You might say, therefore whence does it have truth?

I respond: from this that the intellectus conceives those negations in the mode of positives and imposes names to them, from which [names] it composes an enunciation.

To the contrary: a negation cannot be a cause of truth, for “from this that a thing is or is not, speech is called true or false,” from the book of the Categories.

I respond: a negation is not per se the cause of some truth unless negatively. Therefore propositions of this kind have truth from the terms being conceived, but nevertheless this ‘conceived’ or ‘understood’ being is granted them only through the act of the intellect.

[To the principal arguments]

To the first principal [argument] I concede that the concepts of the most general are first only in the first order, and therefore the consequence does not proceed.

To the second: I deny the consequence. To the proof it should be said that although the do not have a supervening genus, as that one says, nevertheless they have some superior concept, as has been proven.

To the third I say that he does not speak unless about quidditative categorical predicates, and in their order there is a state [status], as he proves for the ten highest [categories].
To the fourth it should be said that he speaks about substance in comparison to accidents, not in comparison to whatever concept, whence only the proper concept of being is unqualifiedly first, al least by primacy of adequation.

To each confirmation it is clear through the same [argument].
[1] The text in curly brackets is present in only two manuscripts and seems to have been added in the margin of the De ente by Petrus Thomae after manuscripts of the work had begun to circulate.
[2] That is, in the second question of the prologue of Petrus Thomae’s Quaestiones super libros Sententiarum. I have not identified the passage.
[3] In Quaestiones de ente q. 12.
[4] That is, the concept of being is quidditative, the concepts of the coextensive attributes [passiones] of being are qualitative.

A poem by W. B. Yeats I don't believe I have posted before. From The Collected Poems of W. B. Yeats.

Bald heads forgetful of their sins,
Old, learned, respectable bald heads
Edit and annotate the lines
That young men, tossing on their beds,
Rhymed out in love's despair
To flatter beauty's ignorant ear.


All shuffle there; all cough in ink;
All wear the carpet with their shoes;
all think what other people think;
All know the man their neighbour knows.
Lord, what would they say
Did their Catullus walk that way?

There is an interesting discussion in vol 1, on the topic of "De ente" starting on f. 51rb. Here we get the mnemonic "Reubau" for the transcendentals. It stands for res, ens, unum, bonum, aliquid, verum. According to Jan Aertsen, the same mnemonic occurs in Dominic Soto (1494-1560). A fun little text by Pelbartus, quoted below:


"Scotorel." appears to be Peter of Aquila, for Pelbartus adopts the former's theory of univocity as a mode of conception, an attempt to reconcile Scotistic univocity with thomistic analogy.
Posted by Lee Faber 2 comments: