Petrus Thomae on Univocity of Being

I have posted on Peter Thomae several times, mostly regarding his treatise that I edited a few years ago, the Quaestiones de esse intelligibili. Now I am finishing up his questions on being, and thought I would share a few arguments in favor of univocity. The De ente is comprised of fifteen questions and these are roughly divided into three parts: discussion of the concept of being (qq. 1-10), discussion of the extent of univocal predication (qq. 11-13), and a section on the parts of being, i.e. God, the categories, finity and infinity (qq. 14-15).

First I give an argument that illustrates the systematic nature of the treatise. Peter stitches together various conclusions that he has proven in other questions, leaving univocity as the only surviving option.

Major premise: "Furthermore, if the concept of being is not univocal, this will be because [1] being does not have a proper concept, or [2] because its concept is denuded and despoiled from every ratio, or because with [univocity] posited, the [3] analogy of beings [analogia entium] and [4] simplicity of the first being cannot be preserved."


Second, I give an argument from the same section, in which Peter is showing that the denial of univocity is impossible.

Fifth: if the concept of being is not univocal to God and a creature, therefore through the first principle nothing can be proved of God, which is unfitting. The consequence is proved thus: being [esse] is verified of every positive; but God is of this kind; therefore etc. 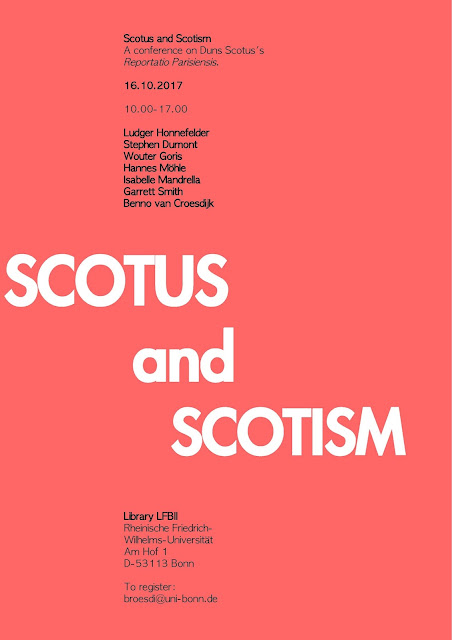 Scotists in the News

Here's a bit of news: a Scotist landed a job! Perhaps we can dare hope that the Scotus edition will be finished one day?
Posted by Lee Faber 3 comments: