I recently received some beautiful volumes in the mail.  At one point they were for sale here, though I don't see them there now. Anyway, photos below. They are part of a series of reprints, for a series called Scripta Scotsitica Antiqua. (What a great idea!) They claim that they will eventually add several other volumes to the series, such as some of the works of Mastrius and other early modern Scotists. I for for one look forward to that day, as there is nothing more irritating than reading Mastri in the grainy scans one finds on the web.

The volume I was sent is a reprint of an index by Carolus Franciscus de Varesio and is found in two volumes, reprinted by the Seminarium Theologicum Immaculata Mediatrix.

There is an English introduction by fr. Peter maria Fehlner, F.I.,  from which I will reproduce some snippets.

The goal of this series is to make accessible once again to the general public, particularly that public interested in the study of Bl. John Duns Scotus, the now virtually inaccessible published works of those disciples of Scotus in times past, before the suppression of the many and influential university centres dedicated to the study and promotion of Scotus in the Church and in the world. These works, in fact, constitute a kind of on-going witness to the mind of the historic Scotus and not a Scotus recycled according to the exigencies of current intellectual fashions. Hence, these ancient works are in fact the only adequate objective standard for discerning in modern reconstructions of Scotus' thought what is historically valid, and what is merely reinterpretation to adapt the subtte Doctor to current intellectual fashions and so make him once again "acceptable" in the halls of academe.

These works are for the most part fruit of the systematic, intense, continuous and in large part interacting scholastic activities of those many centres of scotistic study throughout all parts of Europe up to the Protestant reformation, and thereafter to the French Revolution and its aftermath in the 19th century throughout  most of Catholic Europe. The first components of these studia scotistica were present even before the premature death of Bl. John in Cologne, Nov. 8, 1308. Through the efforts of the first disciples formed by the Master himself by the middle of the 14th century Franciscan friaries linked to the Universities of Paris, Oxford and Cambridge, and of Cologne, where Scotus himself either studied and/or taught, and shortly thereafter to that of Naples, and later still to those of Salamanca, Erfurt, Padua, and Bologna, [and Barcelona!!!] to mention only a few of the better known, had become major scotistic centers. There the study and promotion of the via Scoti in theology, philosophy and science, and in the practical order: spirituality, moral theology, jurisprudence and what is today called aesthetics, made Scotus one of the major influences in European thought even to the present days, outside the Church as well as within. Often enough the scotistic provenance of key aspects of this thought are no longer expressly recognized or their original meaning and implications correctly understood and appreciated.

There is a lot more discussion of the history of the decline of Scotism. Fr. Fehlner thinks it is largely because of the immaculate conception. This made the Dominicans bitter enemies of Scotus probably during his lifetime, and the protestants shared this disdain. Apparently the protestants published in 1540 a "Alcoranus Franciscanus" which attacked Scotus, especially the "Franciscan thesis" of the motive for the incarnation.

Reading and interpreting these stupendous contributions to the theological-philosophical tradition of the Church, however, involves something more than availability of a good text (and perhaps a good dictionary). Without a living tradition made up of masters whose ability to provide the hermaneutic key to these writings derives in unbroken fashion from Scotus himself, there exists in practice no sure and reasonably easy to apply neutral criterion for discerning in current reconstructions of his thought what is the sense of Scotus himself and what is merely an accommodation to current intellectual fashion."

So there you have it. The series will publish the works of the great masters of the Scotist tradition to aid in the study of Scotus. This is what I have learned to do myself, though I largely confine myself to those who would have known Scotus personally or would have known those that did (so up to basically the 1340's, I suppose). Hopefully some of them will go into the series as well. So many thanks to my benefactors, and keep up the good work! 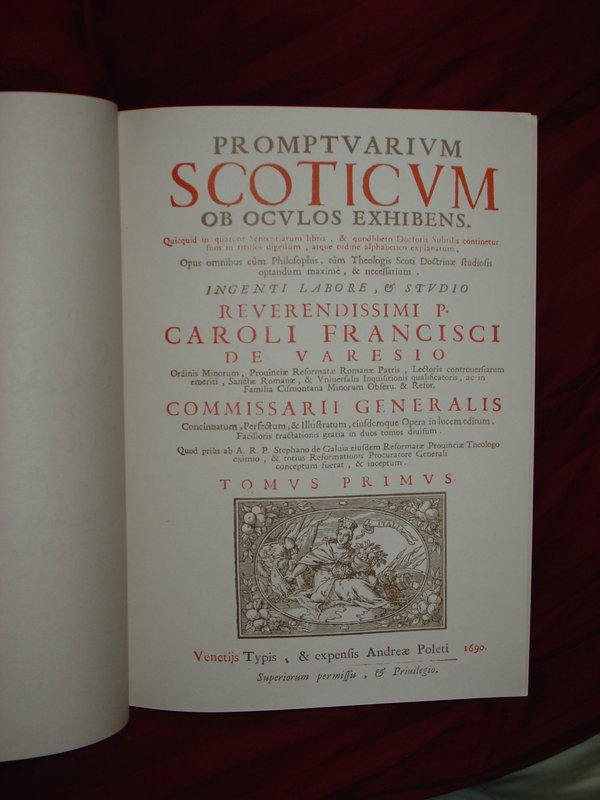 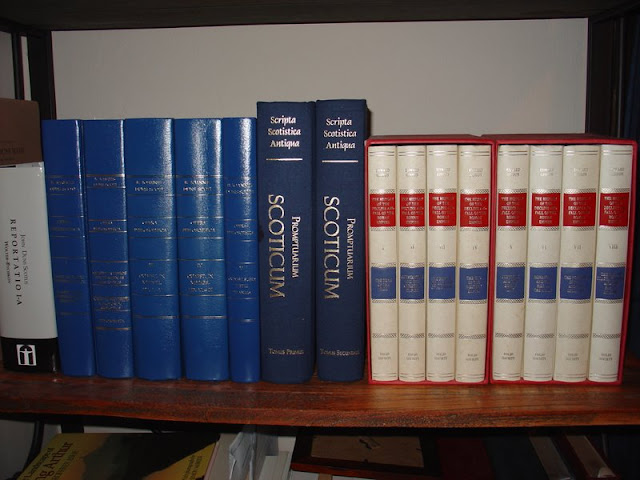 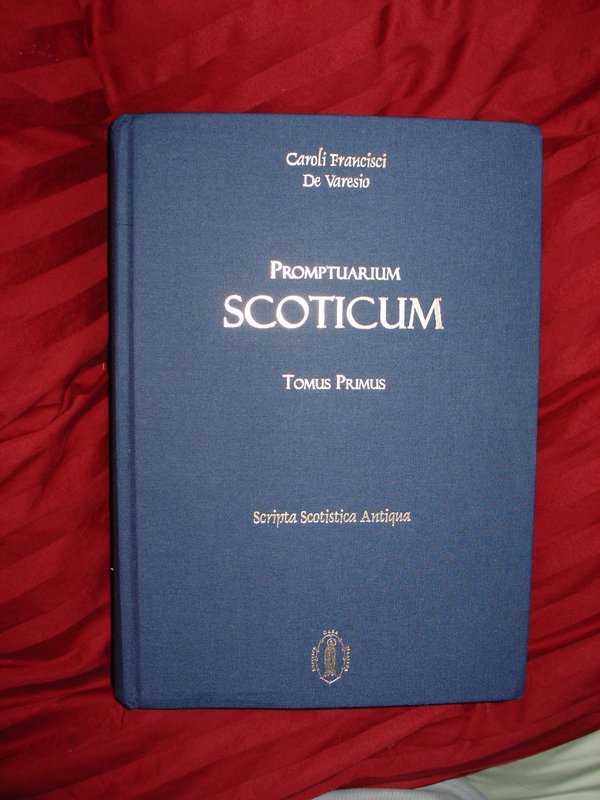 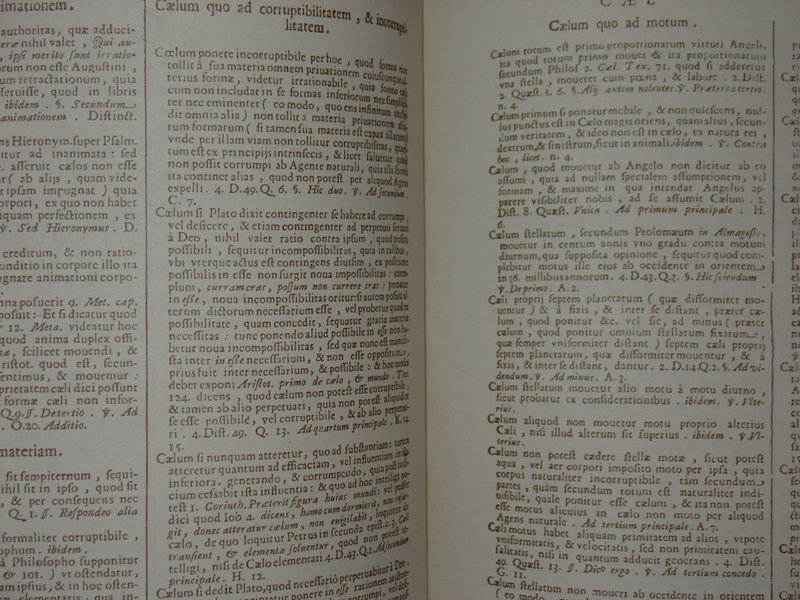 This is fantastic! I'm totally jealous. I'll have to get a set when I can.

Wonderful news! We need Mastri to be more available.

To everybody. Go to amazon.it and by them there.
anyway, I think, it is a great idea, eventhough I am not scotist, but a thomist.
But yes, let us have Mastrius and Punch as well in print.

PS: I have bought Richard Cross: Duns Scotus OUP US 1999, and I soon begin to study this text as well.

Sorry, it was not amazon.it. Try Deastore.it

The series has thus far not seen other volumes, and it's been a few years. The 12 volumes of Angelo Vulpes' Summa were photographed, but the photos were never prepared for publication. For the Promptuarium, each photo was retouched by hand in Photoshop, which is obviously a lot of work.

The Promptuarium can be ordered from the publisher in Italy.

Thanks for the update, Anonymous. If the project is still ongoing, perhaps I could help out.